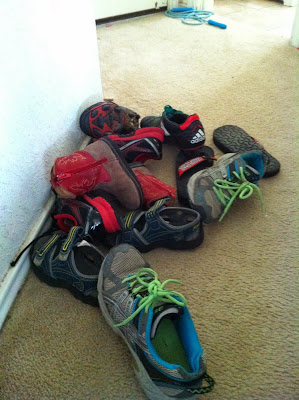 So I'm a little paranoid.  About shoes. Shoes in the house, specifically.  Growing up, we took them off at the front door. This habit began when we lived overseas in Dubai.  The local people there did the same when they entered their homes.  Sounded good to us.  Less dirt in the house!  And now, less allergens tracked in.

Turns out, there is another advantage of putting your shoes by the door when you come in.  We always know where our shoes are.  In the closet or by the door. I have dragged Scott into this idea which he has kindly begun to get on board with.  The kids however, are still working on the habit. I still hear grumbles and "awwws" as I announce, "Please take off your shoes and put them by the door."   Sometimes they sweetly oblige, but other times the shoes do not come off right away and end up in no man's land.  This of course means that shoes cannot be found when they are needed. Like when Mom is dragging them out the door to be somewhere.

Fortunately,  this is a mistake they can afford to make with a small price to pay.  I would rather them learn from this kind of mistake than some one with a bigger price down the road when they are a few years older. As Foster and Clive have said, we build self-esteem by learning to make successful choices.  I just have to remind myself of this and tell myself that I do not need to follow them and say, "Put your shoes by the door" until they do it (unless there is mud).  I forget sometimes....a lot of times..., but this weekend I remembered to just give one warning. So this morning, (Sunday!) when we were trying to leave for church AND the USA vs Australia women's soccer (YEAH!!!!!) we had some problems.  Zachary was trying to pack his change of clothes that included his sneakers and they were no where to be found.

I tried super hard to be patient...hmmm you might have to ask them how that turned out...and then also sympathetic to how he was feeling so I could lessen the power struggle (as indicated in Love and Logic which I'm trying to make sure I'm doing because I do love their philosophy).  So I said, "I'm sorry you can't find the shoes you need. I feel very frustrated when that happens to me."  He was extremely upset without his sneakers and ended up having to go with just sandals.  The first few minutes of the car ride were extremely unpleasant with a little boy screaming that he wanted his shoes.  Hopefully our sympathetic lines of, "I'm sorry you don't have your shoes...I know it's frustrating to not know where you put them" helped with the realization that it was his responsibility.   We also did ask him when he was in his calmer state about what might have happened if he had put his shoes by the door.

Anyhow, after the morning at church and then the game at the Alamo Dome, we came home and Zachary searched for his shoes, very concerned that he would not have them for P.E. tomorrow (found them in the guest bathroom...?what??? I never would have thought to look there).  The hope is that the shoes will be sitting happily in their home by the door far more often.

Posted by English at 3:54 PM No comments: