Rotating All of Them Toys 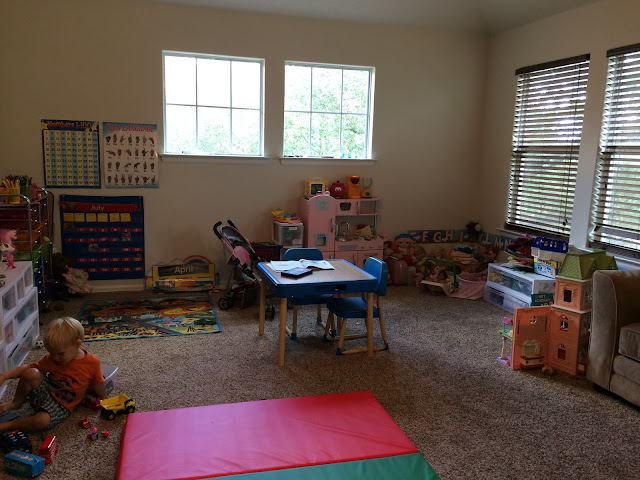 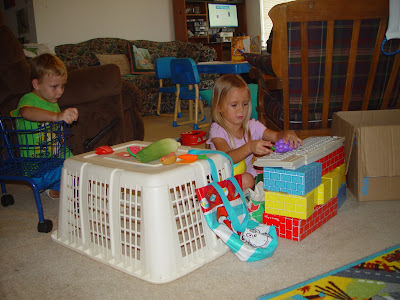 I am not sure that I have come across any family of children that said "We don't have enough toys in our house.  We really could use some more" or kids that say, "I think I'm good on toys, thanks though Mom."

And clearly, would you ever find parents of young children that say, "I never step on toys that get left out...because my kids never leave them out! They love putting their stuff away. They developed a nice habit right off the bat!" If they do, they are hiding something from you.   Anyhow, we know that some are better at it than others, but kids have to be taught to manage their possessions.

I am as guilty as the children for enjoying more toys and games coming in the house.  I love them as much as they do sometimes.  It is really not a good idea to take my kids to Toys R Us, but it is equally not a good idea to take me to Toys R Us either. I think about how that would be such an educational item and/or I could use that in a music therapy session, or I just really want that! When the kids are grown and off to college I think I still would love to have a small play area for people that come over with kids, and just because I love seeing toys set up. Yeah, don't mention that to my husband.

In our immediate gratification world, it is challenging to keep the "outflow" of items greater than the "inflow." We acquire so much stuff. Often times kids might be very creative and find new ways to use their toys as they grow as well. I have a creative one that does not like to get rid of her toys. She gets attached to all of them and can find some way to include them in any pretend game she is playing. When I was her age, I felt like my possessions had feelings and I would hurt them if I gave them away too. As you have more kids and kids that are in different age ranges, you start to acquire new toys but still need the old ones. We are also in that category. We find ways to get rid of them periodically in our "outflow box," but we still have a lot and too many to leave out all at once.

Kids may outgrow toys because they need more stimulation as their mind grows and matures.  Sometimes though, they may start to not notice some of their stuff that has been in the same location and would play with it if we changed it up a bit.  Maybe sometimes the answer is to get rid of stuff and get new stuff (or just get rid of stuff) and maybe sometimes we can use what we have by doing a toy rotation system.

I know many families have a unique system that works for them. I have tried different ideas over the years.  We started with one idea and have added 3 more since!

When I first started rotating toys, I just put some away in the closet in a plastic tub for a while. I would forget about them though and forget to pull them out later.  Or I was afraid to put things away because they would miss it or something, as if we didn't have enough already out. We still use it though. Especially when they grow and we swap out developmentally appropriate toys. 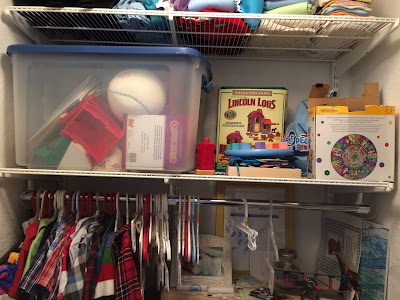 That's our put-away-for-a-while bin and shelf.

My next rotation technique was to swap what toys were displayed on the top of the shelf and what was in the drawers, or if you have one of those colorful shelves with the bins, swap which ones are eye level or on the top. 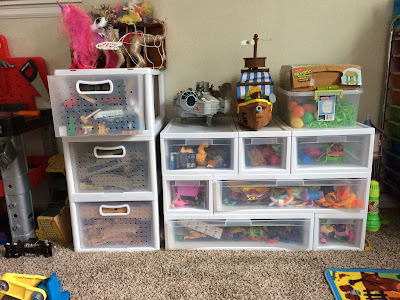 Right now we have horses, Jake and the Neverland Pirates, Bamboo Blocks, The Selenium Falcon, and the colored chicken egg matching box in sight.

My third rotation technique I tried and still do each month (ish) was completely swapping locations of toys, as in the rooms they are in. We happen to have a few toys in the living room, a few in my youngest's room, a few in my closet so that Lincoln can play while I shower, and the rest in the playroom. Just rearranging or changing where the toys are can really draw attention to items they have not paid attention to and give it a whole new appealing look! Suddenly it looks more interesting! 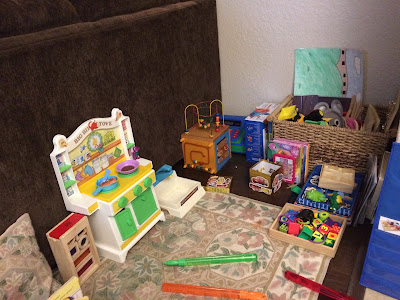 This is our downstairs toy area behind the couch and next to the kitchen. The little kitchen stays here but everything else including the stuff in the basket gets changed out.

One of my favorite ways to rotate toys or draw attention to forgotten items is doing themes. I had a friend that got me started on these when my oldest was 2. I love it. This way obviously takes more planning, but I find it really entertaining for both myself and the kids. Even my older to like to see what I have set up when the come home from school.  Now, before proceeding, please do know, I am not perfect at remembering or planning ahead to make these themes happen every single week.  Don't give yourself a stress headache trying to do these every week if that is too much. Just start with an attainable goal. Sometimes I aim for 1x a month during the school year.  I think this school year we have done 6 themes and it's February.  It's just to change things up and make it a special week.

For example, I gathered all of the farm themed things we have including toys, puzzles, books, etc. and put them out in the play room/game room in a particular area.  We also made a rice sensory bin with some of the plastic figurines.  And yeah, my only original idea was the hay. And finding the stuffed animals. Pinterest took over for the rest. 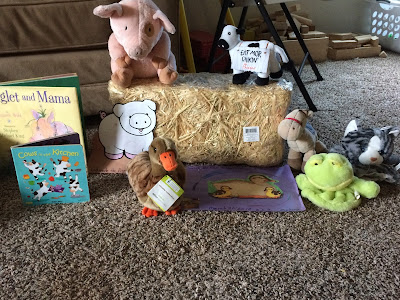 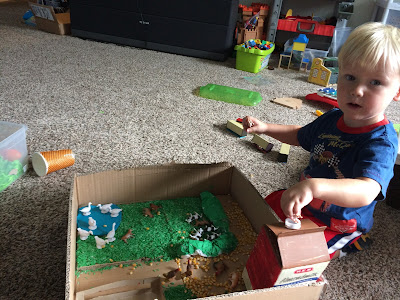 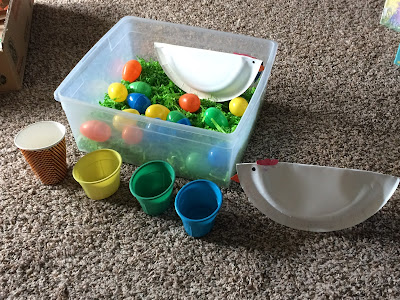 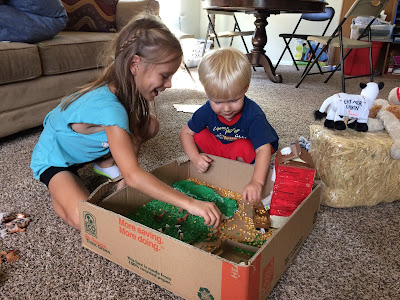 Rainbow week was a total blast. Know any young kids, not obsessed with rainbows? Maybe a few, and perhaps those who might be color blind to an extent but not anyone here. We brought out the rainbow scarves to dance, jumped on colored cards to Rachel Coleman's Do You Know the Colors of the Rainbow, painted, categorized some rainbow toys, and brought out our Rainbow books. 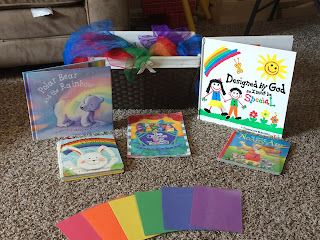 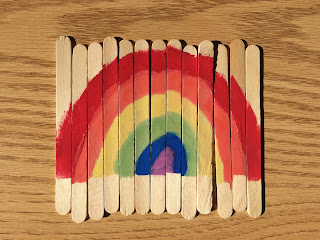 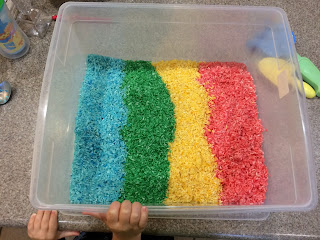 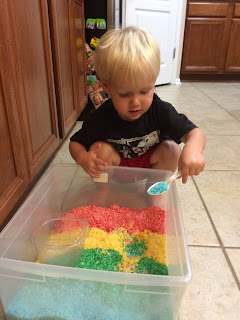 The colored sections were mixed together in about 2 minutes. But it looked cool for a moment. 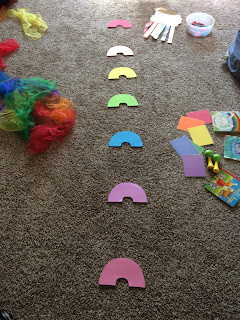 Problems squeezing in exercise solved! We jumped for about 30 minutes on these colors during the song. 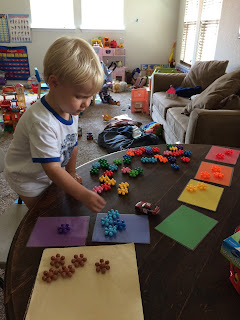 The past 2-3 weeks we have done zoo things because Lincoln is totally in love with zoo animals right now. So the zoo toys have been hanging out. I put out our zoo books, puppets, fisher price animals, made little homes out of blocks, for the zoo stuffed animals, coloring pages, zoo animal rubbings that I have had since I was a kid, and zoo play doh. Raffi has his famouse song Goin to the Zoo also which is fun as well as the Wiggles with Do the Monkey. 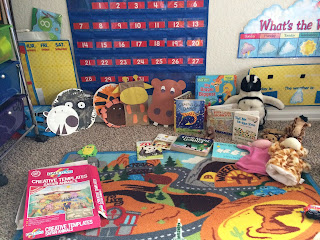 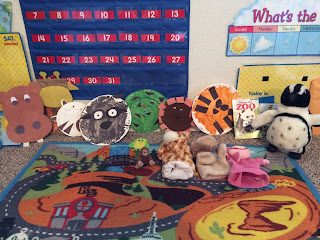 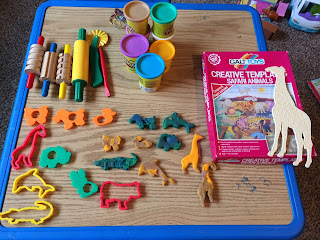 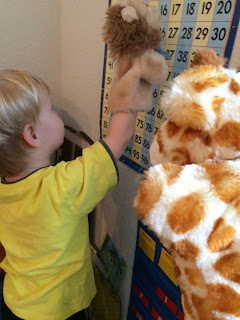 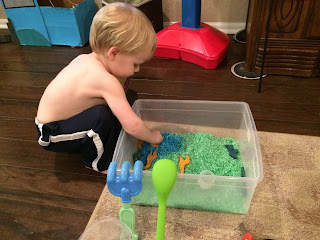 Be creative with the toys you can use. During our theme weeks, toys that were not necessarily related to the theme got used also, such as the blocks that made our zoo homes and the food from the play kitchen so they could eat. You often end up using more that you initially may think!

Well, that's what we got! Maybe you have your own rotation system down that is different and works well for you. These  are 4 things that work well for us.

If you ever do a theme week, I hope you enjoy it as much as I do! And the kids of course :)